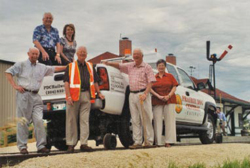 On Christmas Eve, 2007 the Thomas Sill Foundation celebrated the 20th anniversary of its first grant. That award was $5,000 made to the Christmas Cheer Board of Greater Winnipeg.

Much has changed for the Thomas Sill Foundation since 1987. The $19 million bequeathed by Thomas Sill has grown to $35 million, yet the Foundation has awarded grants in excess of $21 million. Such is the beauty of philanthropy based upon permanent endowments.

This signature award in our 20th year contributed to 56.5% of our grants being made in rural and northern Manitoba. The remainder of 43.5% was made in Winnipeg. In total, cash grants were made to 79 charities in the amount of $1,163,640. Individual grants varied in size from $600 to $150,000, including some multi-year grants. On an annualized basis the average grant was $12,300. All grants can be viewed by clicking on “Enter Annual Report” below.

Special projects, in addition to our core grantmaking, have become a significant portion of our work. These initiatives include: